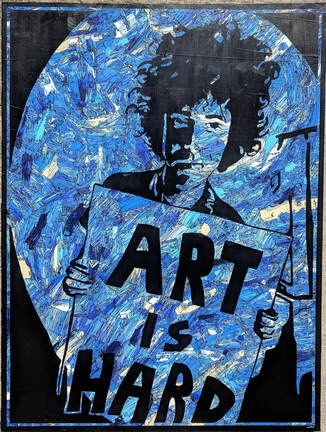 “As a child my earliest memories of art are not between the lines of a coloring book, but the lines themselves.   It was the lines that stuck with me.  In my art today, the focus is the dichotomy between the arbitrariness of how color is positioned on the canvas against the carefulness of the outlines of that color.   The line takes the color and makes it pop.

There is beauty in imperfection.   As a leader of people in business, I would draw a straight line using a ruler and then freehand a straight line next to it.   I would then ask my employee which one was they preferred.   Inevitably they always said the one drawn with the ruler.    Ah, but the imperfection seen in the line drawn freehand has so much more soul and power in it.    My artwork continues to be about these small blemishes that the hand drawn line produces.   The power and the soul of the artist.   Life is not always perfect, thank goodness.” 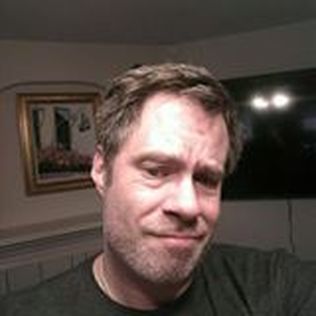 Brad Antifolk is a visual artist who currently resides and works in the Dallas/Fort Worth metro area.   His work centers around the way that outlines change the way that colors are seen.    The focus on outlines has been consistent even in his earliest artworks from high school and beyond.   He studied design at N.C. State university and art at Appalachian State University before getting a business degree and later a MBA from Wake Forest University.  While pursuing a career in business Brad Antifolk found different places to act as an outlet for his creativity.   Most notably he created a large and expansive website centering around the turn of the century Antifolk scenes based in New York City and the UK.  That branched out into a small circulation magazine or "Zine" called ANTI-UP [the magazine].  His focus nowadays is on his family and paintings.

Originally inspired by the women's march in early 2017 Brad Antifolk began to paint again.   It had been over a decade and a half since he had last picked up a paintbrush.   He started painting mostly figurative work based on whatever was trending on twitter at the time under the name Brad Antifolk for the first time.  The works created in the  "Trending Painter' series were more or less a precursor to things to come.   The outlines later associated with the artist were present then, but the subject matter took the focus away from the lines.   At some point the series gave way to the "Anarchy of the Abstract" series.   In this series, inspired by the music that drove his old website and magazine, Brad Antifolk began to focus on lines against colors.   This was what he had artistically been evolving towards his whole life.

Starting with the pieces like "Not Jealous of the Angels," Brad Antifolk began taping off parts of the canvas playing with design elements and breaking the painting into smaller sections or "windows".  "Nausea" also sees the artist play with white acrylic pen outlines.   Something that rarely has shown up in later works.   By the time pieces like "Never Get to Know" or "Unpatriotic" were created this technique of seemingly randomly applying chosen color to canvas and then outlining any color deviation was commonplace within his work.  During this time a second companion series was started using the leftover tape from creating windows on the canvas.   This series has been primarily contained to small 5" x 7" canvases in which the tape is applied.   With larger pieces such as "Go Man Go," Brad Antifolk has made these windows act as outlines using negative space to the viewer who is away from the canvas.   But the details of each section show small color variation outlines to the viewer who examines the piece up close.

Most of the pieces are named after music that has inspired the artist.   The themes that are present in some of this music include alienation, relationships (both loving and sexual), idealism and politics.   As the name Antifolk suggests the art created is meant to not be categorized into a small space.  Though partly a reaction against what has come before, the art created is more of an homage to artists of the past with a cynical twist.